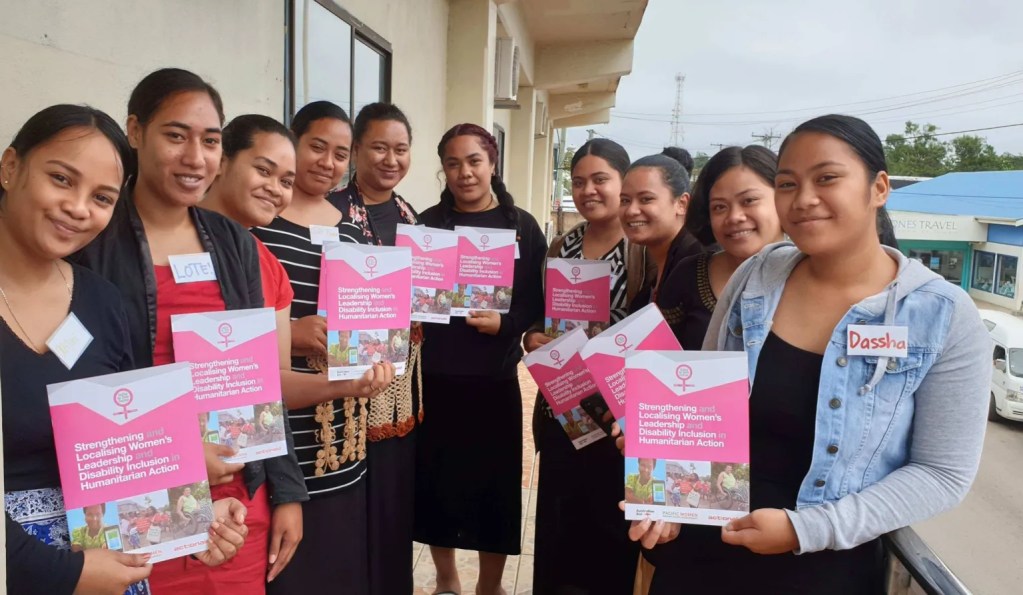 In 2020, Tropical Cyclone (TC) Yasa wreaked havoc across the South Pacific. As torrential rain, howling winds, and thirty five-foot waves lashed the island nations of Vanuatu, Fiji, and Tongo, thousands of homes and livelihoods were lost. By the time the storm had passed, at least four people were dead, with a financial toll reaching into the hundreds-of-millions of dollars.

And then there are the individual stories of survival.

“I spoke to a young woman from Naviavia, a coastal village, in a post disaster response visit,” recalls Sharon Bhagwan-Rolls, a second generation Pacific Fijian feminist working across the humanitarian-development-peace nexus. “She was pregnant at the time, and had to crawl along the ground to reach an evacuation shelter. In the midst of a category five cyclone, that’s unthinkable.”

Rising global temperatures are increasing the frequency and intensity of deadly storms like TC Yasa. When disasters strike, the destruction can seem indiscriminate; but constituting a majority of the planet’s poor and disenfranchised, it is women and girls who face the greatest risks.

Women are fearless leaders in the face of climate change

Women are not powerless victims of an ever-worsening climate emergency, however, nor are they passive recipients of disaster aid. In the Pacific region, as in other parts of the world, women are spearheading climate adaptation and mitigation strategies — something Bhagwan-Rolls has championed throughout her three-decade journey in the women’s rights movement.

Following the chaos of TC Winston in 2016, she co-created the Shifting the Power Coalition (StPC): a feminist coalition of diverse women-led organisations from across the Pacific that works to strengthen women’s voices, agency, and leadership in humanitarian action and disaster preparedness, response, and recovery. Key to this, Bhagwan-Rolls says, is shifting the focus away from traditional, securitised responses to climate-related crises.

“The word ‘security’ immediately makes people think of men sitting at tables determining what happens for everybody else. We’re building a different approach which isn’t militarised, but focused on interlinkages between the environment, food security, access to water, healthcare, and so on.”

Climate change is a risk multiplier

Equally important is recognizing climate as a risk multiplier in security situations, exacerbating loss of livelihoods, food insecurity and competition over scarce resources, as well as increasing the threat of trafficking and sexual violence for women and girls. At the same time, climate disasters also provide new opportunities for involving women peacebuilders in conflict prevention and adaptation strategies.

Intersectionality is an integral part of what StPC does. Its membership includes LGBTQ+ and disability rights groups, ensuring that all women are represented in the campaign for climate justice. And though there is much progress still to be made, it’s important to recognise that women and marginalised communities aren’t idly waiting for a seat at the decision-making table, Bhagwan-Rolls argues, but are already there rewriting the rules.

“Women’s involvement can’t just be about what happens after a cyclone or a flood strikes. Women need to be shaping policy at all levels. That’s why our approach takes into account diverse women’s experiences and lived realities, and uses those to effectively localise climate response systems.”

It’s a message echoed by the Compact on Women, Peace and Security, and Humanitarian Action (WPS-HA), hosted by the UN Women Secretariat, which is calling for a redesign of global peace and security and humanitarian processes to systematically and meaningfully include women and girls. StPC joined the Compact as a Signatory last year to further women’s rights in conflict and crisis situations, including climate disasters.

StPC’s work also correlates closely with the theme of this year’s International Women’s Day, ‘gender equality today for a sustainable tomorrow’, as well as the sixty-sixth session of the Commission on the Status of Women, both of which recognise women’s contributions to the fight against climate change.

Acknowledging and promoting these contributions is particularly important in the Pacific region, where women’s representation in formal decision making remains low. Giving women the knowledge and resources to engage with disaster management officials — and getting more women into leadership positions at a national and local level — would help turn climate policy commitments into concrete action, Bhagwan-Rolls says. Likewise, greater involvement of the women’s rights movement would help bridge the gap between the scientific community and women and girls on the ground, leading to better readiness and disaster response outcomes.

As TC Harold, the first category five tropical cyclone of 2020, bore down on Vanuatu’s coast, WWW members sprung into action. With SMS weather alerts updating them on the storm’s progress, women and girls set about securing rooftops, storing food and clean water, and relocating vulnerable individuals from unsafe structures. In terms of local resilience, WWW made a massive difference, Bhagwan-Rolls says.

What would her advice be for women and girls seeking to create their own climate adaptation and mitigation strategies?

“You also need to take time to consider what commitments are being made on your behalf — get to know what decision makers are talking about with regard to the environment. And if you don’t like what you’re hearing, be persistent about change.”